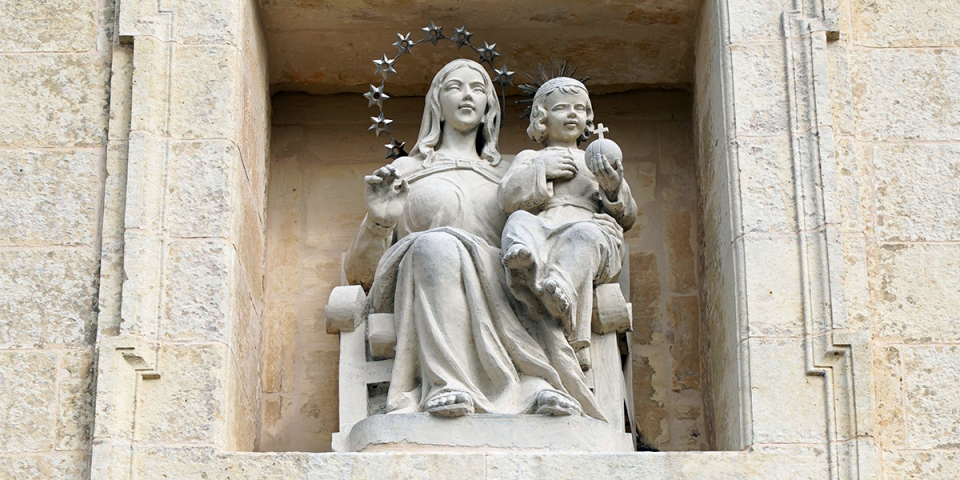 Malta, under the gaze of Mary

On February 20, 1743, while lighting a lamp in front of the Holy Image, the sexton of a Maltese church noticed that the face of the Madonna was shinier than usual.

Through her yes, Myriam of Nazareth (Mary) became the Theotokos. Myriam is also known as “the New Eve.” Because of Eve’s disobedience to God and Adam’s cooperation with her, they lost sanctifying grace for themselves and their offspring. Like Eve, Mary was created full of grace. But unlike Eve, the young woman from Nazareth remained obedient to God, just as Christ, unlike Adam, did. In cooperation with God, Mary became Mother of the Redeemer and, in cooperation with Christ, she became Mother of the redeemed as well.

Since the beginning of Christianity, Myriam has visited us regularly. In fact, the first Marian apparition was to the Apostle James in Spain. Unlike future apparitions, this one took place before her Ascension. She intervened and helped the Apostle in his difficult mission to the Iberians. In the year 40, while he was praying on the bank of the River Ebro, outside Zaragoza, the Virgin appeared to him, holding the Child Jesus, standing on a pillar. This visitation is venerated as Our Lady of the Pillar (Spanish: Nuestra Señora del Pilar). She asked the Apostle and his eight followers to build a church on this site, promising that: “It will stand from that moment until the end of time in order that God may work miracles and wonders through my intercession for all those who place themselves under my patronage.”

Throughout the ages, the Blessed Virgin Mother keeps visiting her children, especially those who need her most — the weak, the poor, the downtrodden, the sick and the pure of heart. Fatima, Lourdes, Akita, Guadalupe, Loreto, Garabandal, Ta’ Pinu, Rabat, Kibeho … the list goes on, Our Heavenly Mother constantly assisting us.

Our Malta is a Marian land, protected by Mary’s mantle. As we have seen in previous articles, the Maltese have never wavered in their devotion to the Blessed Virgin. And she showered them with her graces. And how can ever a Mother abandon her children? How it is ever possible that a mediatrix between Jesus and her devotees would not answer their prayers and grant them graces in their hour of need, as she did in the wedding feast of Cana? After visiting the miraculous apparition sites of Madonna Ta’ Pinu and Our Lady of the Grotto in Rabat, it is only natural to love Her back and show our appreciation by remembering the time and places when Holy Mary intervened to protect us, and by spreading these devotions to Her around the world. The following is one of the many other astonishing Marian interventions which happened in Malta. In the next articles we will share more stories of Marian sites, devotions and amazing graces granted by Our Mother in Heaven: 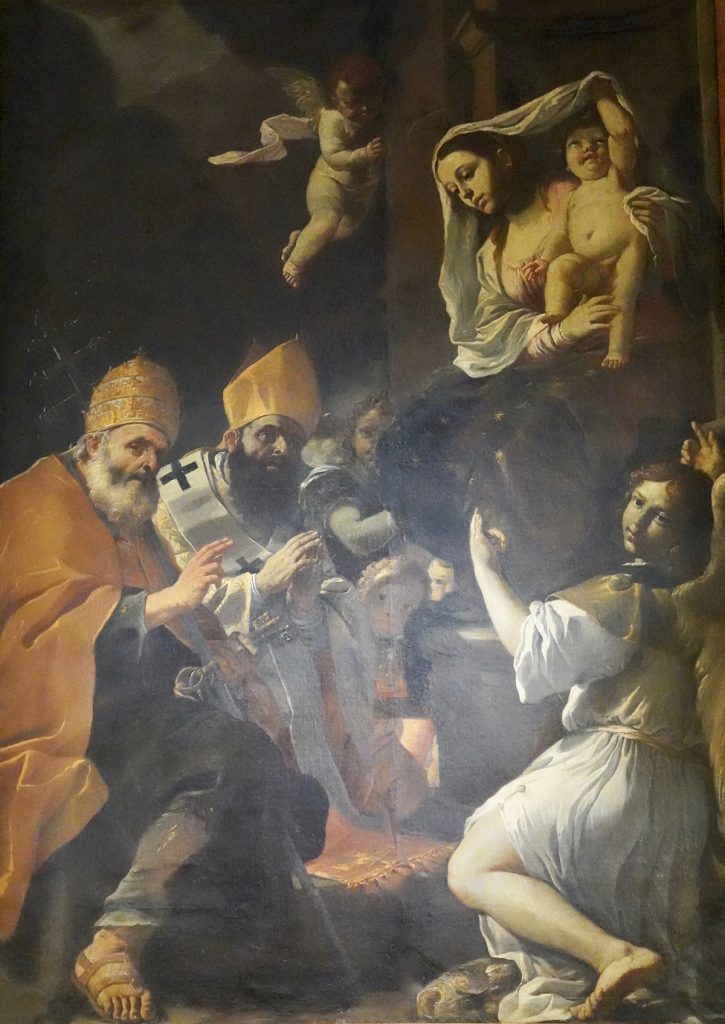 In the village of Lija, which lies in the centre of Malta, there is an ancient Marian shrine, known as the Church of Our Lady of Miracles. It is revered not only by the locals but from all over the Island. The present Church, built in 1664, is not the original one where the devotion to the Blessed Virgin all started. The present edifice is located about 100 meters away from where the old chapel once stood. The old church was erected in what was called Ħal Bordi, a hamlet on the outskirts of Lija. The original chapel had a triptych (in three sections) Sicilian-style painting. It is painted on wood and accredited to the 13th-century Sicilian artist Corso di Buono. It was and still is the object of tremendous devotion.

The painting depicts the Madonna seated on a throne, holding the Infant Jesus on her lap. The Infant is portrayed as the Savior of the World. The Redeemer has an orb in one hand and is seen blessing with the other. Today, this painting is housed in the new church, built in 1664; however, although greatly revered, it is not the titular altarpiece. As we will see in the following paragraphs, through this triptych painting Our Lady showed her motherly love and protection towards Malta.The chapel was first dedicated to Our Lady of August, a title reflecting the Assumption of Our Lady. In 1664, Grand Master Nicola Cotoner paid heftily to embellish the newly built Church to take place of the old chapel. Cotoner commissioned the famous artist Mattia Preti to paint the present titular altar piece. The theme was to be a new version of the original Sicilian one. But to meet the Grand Master’s request, Preti added the Archangel Raphael in memory of Nicola Cotoner’s recently deceased brother, Raffael.

Now, we must go back to the original triptych painting, and the miraculous event of Our Lady of Miracles – Il-Madonna Tal-Mirakli. This extraordinary happening increased the already existing devotion to the Madonna. It took place on the February 20, 1743, when, while lighting a lamp in front of the Holy Image, the sexton noticed that the face of the Madonna was shinier than usual. When he took a closer look he saw large water-like drops trickling down from the Blessed Virgin’s forehead onto her cheeks and chest.  At first he suspected it might be moisture, so he looked for possible humidity, but there was none. So the sexton decided to inform the parish priest, who in turn notified the ecclesiastical authorities. After long deliberation and examinations, it was established that the drops were made of human sweat.The following day, February 21, Malta was hit by a devastating earthquake, but buildings did not collapse and not a single life was lost.

The façade of the chapel of Our Lady of Miracles

The devotion to Our Lady of Miracles had already existed in Malta since the 16th century, so this event skyrocketed the fervor, and people flocked from all over to pray to the Madonna in Lija, and to thank their beloved Heavenly Mother for protecting them during the earthquake. The Our Lady of Miracles church was one of the most visited sanctuaries in Malta. In fact, many hung various artifacts in their cherished chapel as ex votos for the graces granted by Mary. During his pastoral visit in 1747, Bishop Alpheran de Bussan stated that he found prodigious veneration and devotion in this church, and that massive crowds from far beyond Lija visited the shrine. Indeed, it was necessary to build a sacristy to house the sacred vestments and the multitude of ex votos presented by the faithful.

The flow of pilgrims, number of pledges and graces granted intensified so much that on December 23, 1787, this tiny church was consecrated as a place of great devotion. The bishop also issued a decree that the feast of consecration should be on the second Sunday of July. Also, due to this evergrowing devotion, Pope Pius VI granted a plenary indulgence on the feast days of the Assumption and the Immaculate Conception, with a decree issued from St. Mary Major in Rome, on July 7, 1788. He also granted special indulgences on five Marian feast days and every first Sunday of the month to those who visit the painting of Our Lady. And this is not all — the same pope elevated the altar of the church to a privileged altar for three common days a week in perpetuum, and during the days of the octave of All Souls’Day.

This is an aleteia.org opinion piece

Borg, Vincent. Marian. Devotions in the Islands of St. Paul. Mgr. Malta: Historical Society, under the auspices of the Local Organizing Committee of the 9th International Mariological Congress, 1983